This version of Chicken Cordon Bleu is assembled in minutes, and requires no rolling, dredging, or frying. Ham and cheese are sandwiched between two chicken breasts, topped with a creamy sauce, coated with toasted breadcrumbs, and baked until golden brown. 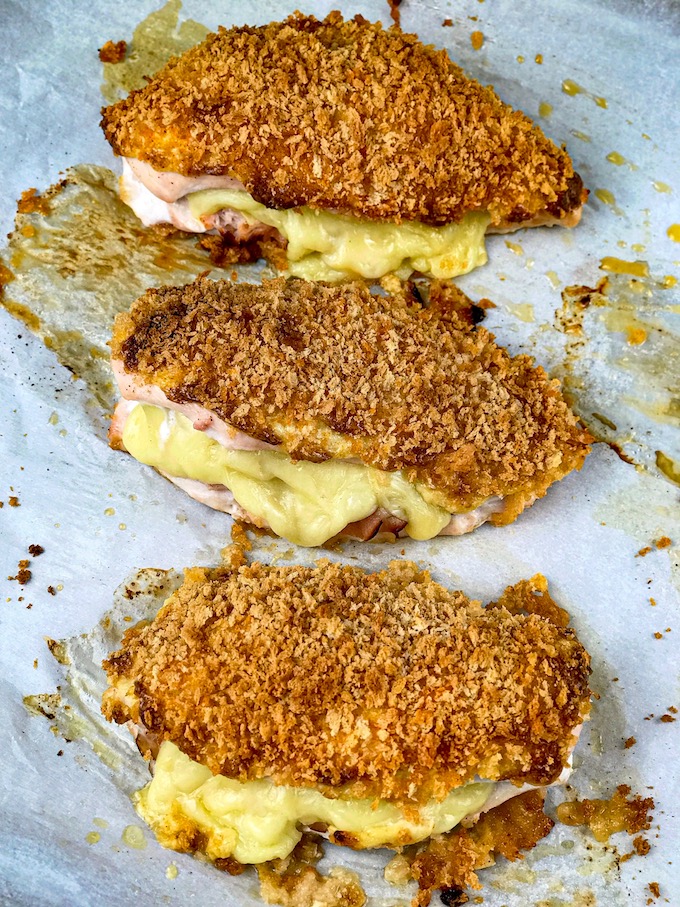 To all the purists out there, look away. I call this recipe simple for a reason. The only thing you have to do is slice the chicken breast in half lengthwise all the way through. No pounding is required. I don’t like to pound a harmless chicken breast because I feel it toughens it. Besides, what did the chicken breast ever do to you? 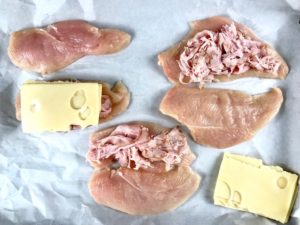 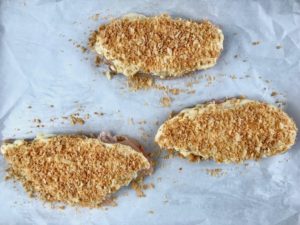 I made sure this recipe could be scaled up or down to make it even easier. For every chicken breast you’ll use:

a drizzle of olive oil

If you want a golden color for your breadcrumbs, you need to toast them for 3 minutes in the oven. It can be done while you’re gathering the other ingredients. When it’s done toasting, put it in a bowl and mix in some paprika which adds a little flavor and some more color.

As for the ham, I highly recommend it’s shredded because it can be piled on and it binds beautifully with the cheese. Each slice of Swiss cheese is folded into thirds and placed on top of the ham. The other half of the breast is placed on top, the mayo mustard mixture is spread on, then the whole thing is sprinkled with toasted breadcrumbs. 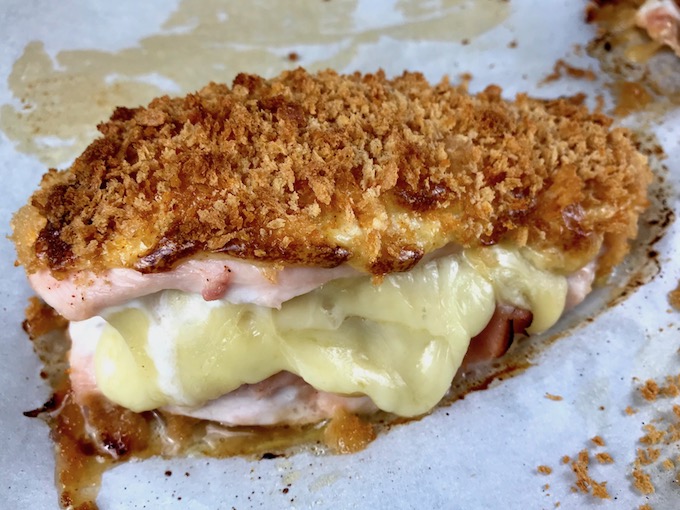 The chicken is baked until the cheese oozes out and it looks de- lush-ous! It only takes about 25 minutes and you have a great meal. I don’t use a sauce to top this because I feel there’s enough flavor in this chicken cordon bleu to hold its own. Besides, I don’t want to mess with the crunchy top.

Try some of my other chicken dishes: 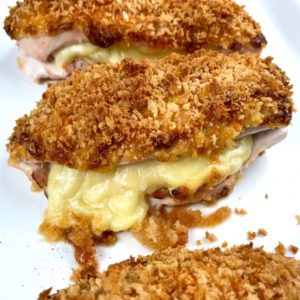 Print Recipe Pin Recipe
This version of Chicken Cordon Bleu is assembled in minutes, and requires no rolling, dredging, or frying. Ham and cheese are sandwiched between two chicken breasts, topped with a creamy sauce, coated with toasted breadcrumbs, and baked until golden brown. This recipe can be scaled up or down.
Course: Main Course
Keyword: Chicken, Quick and Easy
Prep Time: 10 minutes
Cook Time: 25 minutes
Servings: 4
Author: Natalie Gregory