These Cinnamon Sugared Nuts are crunchy, delicious, simple to make, and fun to eat. Perfect treat for your guests at any gathering. Enjoy! 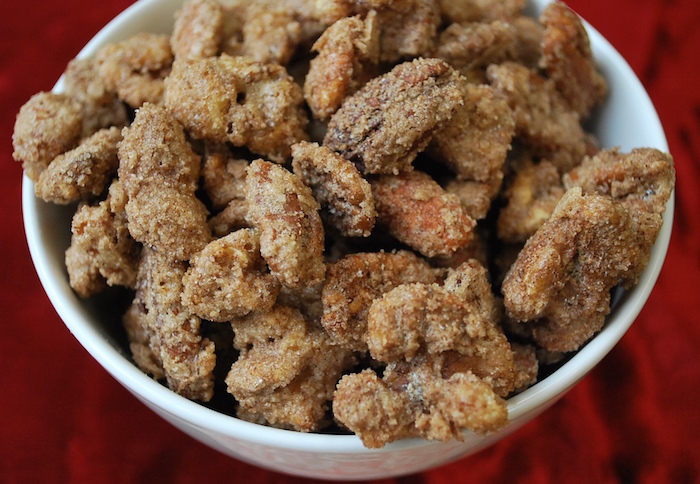 When my Mom was growing up in Peru, there would be vendors on the street with huge copper pots stirring cinnamon sugared nuts. On Sundays, the vendors would be outside with their carts preparing to sell their treats after Mass. She remembers a woman who had her table set up with a primus - portable cooktop - stirring nuts and sugar in a big copper bowl. My Mom and her sister would buy a bag whenever they could with the little money they could spare. The aroma was amazing and would pull everyone to walk in the direction of the roasted nuts. The memory always puts a smile on her face.

I attended a crafts fair where many food vendors were selling everything from soup to nuts - literally. One vendor was selling an assortments of cinnamon nuts and when I asked how it was done, and he replied with egg whites and sugar. Sounds easy right? It is easy. 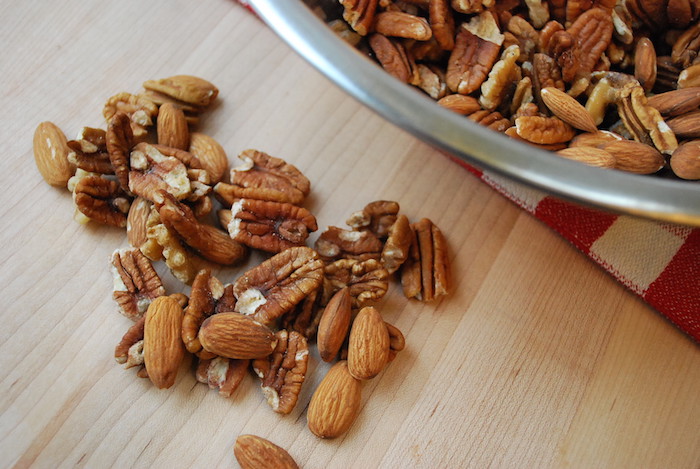 This recipe is very simple. 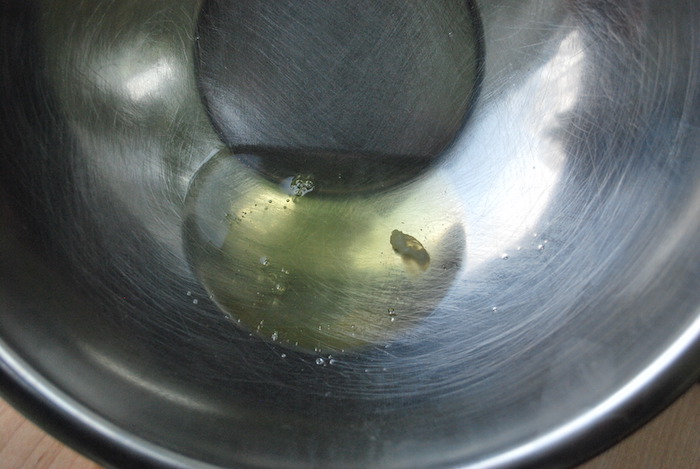 Remove the chalazae from the egg white

First you need a large egg white. Save the yolk for another purpose. Other than when I fry eggs, there is one thing I do religiously when I use eggs and that is removing the chalazae - the white stringy thing attached to the yolk. You may also want to remove it, but if it doesn’t bother you then continue. 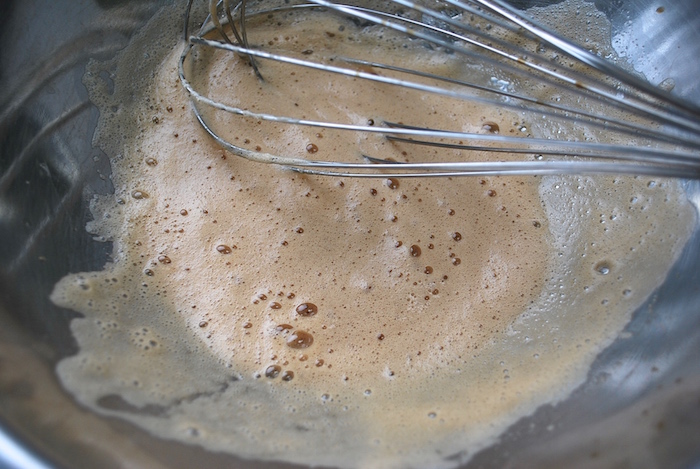 The egg white and vanilla are whisked together until frothy as shown in the photo. You want to whisk it enough so that it is combined with the vanilla and builds a little volume. 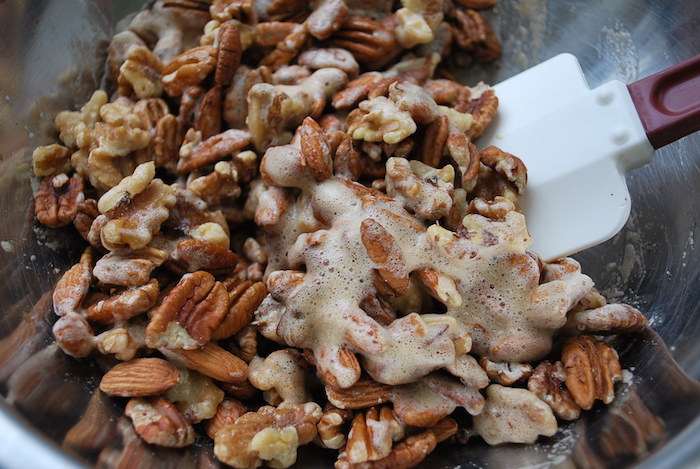 The nuts are added and stirred until completely coated. 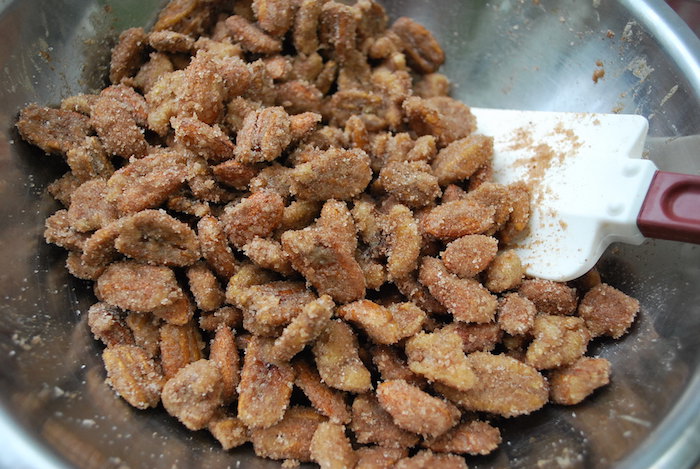 The sugar is combined with the cinnamon and salt then added to the nuts and stirred to thoroughly coat and fill the creases and grooves of the nuts. 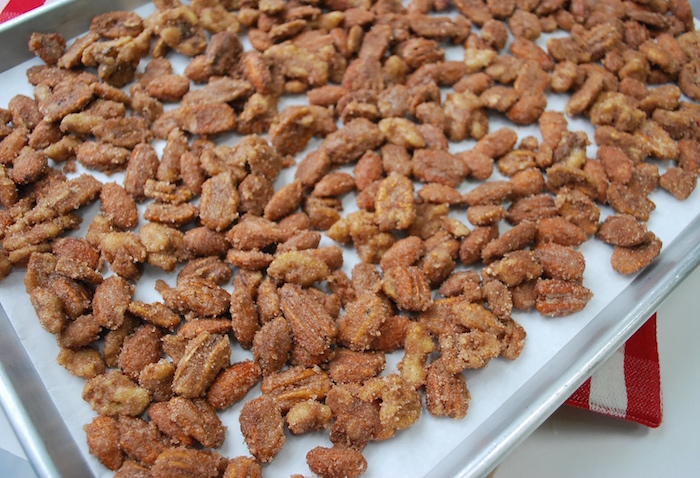 Spread the nuts in a single layer... 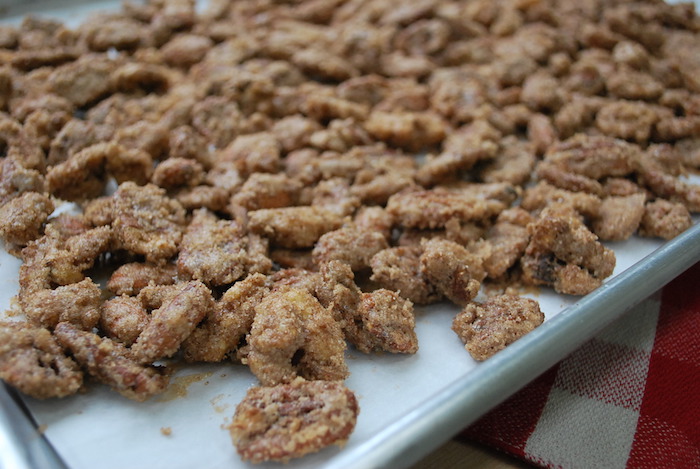 Let cool and break up any nuts that are clumped together.

This is a great little hostess gift to bring to a party. A little something special to show your appreciation. Put them in a pretty jar or bag tied with a ribbon and you’re done. Maybe accompany it with a bottle of Prosecco? Couldn’t hurt, right?