Spinach and Feta Stuffed Portobello Mushrooms is an alternative way to enjoy the flavors of a spanakopita without the hassle of phyllo dough. A hearty dish without the meat, making it a great vegetarian option.

I created this dish on the fly and it all came about because I had four big beautiful portobello mushrooms, some frozen spinach, and a whole bunch of feta. The best part is it came together in minutes.

First, we need to prepare the mushrooms and to do that we need to do a little twisting, pulling, and scraping. It sounds like a scene from 57 shades right? We need to remove the stem and you do that by gently twisting it then snapping/pulling it off. Then we need to scrape the gills out. Doing this makes more room for more stuffing and prevents any grittiness in the mushrooms. It’s a simple process. All you have to do is get a spoon and gently scrape off the gills. Don’t be mad when doing this or you’ll destroy the mushroom. Don’t make a big thing out of it. I feel these days people make a big deal out of nothing. It’s not that daunting.

I buy frozen spinach in a bag which makes it super easy to cook with rather than packed in a box. I don’t even defrost the spinach. When sauteeing the spinach, stir it occasionally to evaporate the excess water. Throw in a little chopped fresh dill - which I tend to store in the freezer. I talk about freezing herbs when preparing my slow roasted salmon with lemon caper butter. Basically, buy a bunch of fresh herbs, use what you need, then freeze the rest and it’s there when you need it again. It’s easier to chop when it’s frozen too.

What’s great about this recipe is it's not fussy. If you want more feta, add more feta. The dill also adds extra flavor. It’s all good.

An egg and some breadcrumbs are used to bind the spinach mixture. I found that without the breadcrumbs, the mixture was too loose which made it messy when cutting into bite-size pieces. Without the binders, it would just be a messy spinach dish with chunks of mushrooms.

To give these spinach and feta stuffed portobello mushrooms a nice finish, I top with some toasted, buttered breadcrumbs. I use the same skillet I saute the spinach in and I don’t bother to clean it. It’s not a big deal because these crumbs are topping the spinach so if there is a stray tiny piece of spinach or onion it’s not going to matter.

You get the meatiness from the portobello, the delicious combination of spinach and feta in the filling, and a slight crispy crunch from the golden buttered breadcrumbs on top. This is a great meal! If you have smaller mushrooms, you can serve it alongside beef or whatever you like.

If you love mushrooms, try: 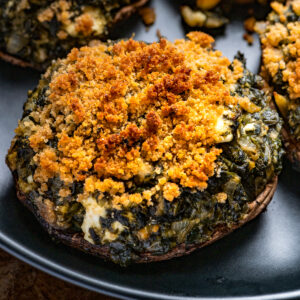 I've made this with both panko and plain breadcrumbs. Use what you have on hand.
Did you make this recipe? I would love to see how it turns out. Tag me on Instagram @thegeneticchef or tag #thegeneticchef and tell me all about it!