A Honey Baked Ham with a touch of bourbon and fragrant spices that blows away anything you can buy but at a fraction of the price. An incredibly simple and delicious meal you can prepare for holidays, parties and gatherings, with little effort.

Have you ever tasted a Honey of a Ham? If you have, you’ll understand why there are lines out the door of their stores every holiday season. The ham is moist and the outer crust is sugary and flavorful. It was always my first choice for serving at parties or during any holiday because honestly, it’s a treat. However, they are a little pricey and not everyone has a store near them. Well, now anyone can make a delicious tasting ham at home whenever they want.

I’ll be honest with you because I like to keep it real on thegeneticchef.com. The first time I made this ham it was so good, it got devoured. I served it at Easter and people went for thirds. That ham got picked to the bone and I shouldn’t have been surprised because it was spectacular.

When I made it for my family for Christmas dinner, I placed it in a different slow cooker that was bigger than the one I used before to fit the size of the ham. I cooked it on low for 4 hours. I knew right when I took it out of the slow cooker that it was overcooked. I was pissed because I had my whole family to feed and they didn’t hold back when something wasn’t good. My brother is the first one to speak either way and I was waiting for it. My sister is the total opposite and wants everyone happy so even though this ham was like chewing leather, she was going to say it was good. You know what happened? No one said a thing. It drove me batty and I finally had to speak up and say the ham basically sucked.

Why did that happen? Why was the ham different this time? It’s because not all slow cookers are the same. Remember the old inexpensive ones that had the flowers on them? If you have one of those KEEP IT! Low meant you could cook things for hours without burning. That was my Dad’s slow cooker. The second time I used a more expensive slow cooker - one that I paid way too much for just for the name. Well apparently low means high.

For that reason, I recommend using an oven unless you have a slow cooker you trust that works the way it’s supposed to work.

Remember, city hams are already cooked. All you have to do is heat them up. It should be easy. One more thing: Ham tastes good hot or cold so better to go under than over. If people complain about your food, tell them to leave. Maybe that’s why no one in my family said anything that day.

Buy a good quality ham. One that is bone-in because that has more flavor and you can make a soup with it afterward.

Buy one that isn’t plumped up with a solution like some celebrity’s lips that just had bad botox injections.

I like to buy a spiral cut because it’s easier. A lesson I learned by accident is to buy the shank end instead of the butt end because the shank end has one bone to cut around and it’s fattier which translates to delicious. The butt end is round at the bottom. This is what I used to go for because I thought it would be meatier. Instead, I found it was harder to slice leaner translates to not juicy. The only time a round lean butt is good is, well, you know.

How to make this incredible honey baked ham:

Lay out a long piece of heavy duty foil - big enough to cover the ham up the sides on a baking sheet.

Place two thick slices of onion on the bottom center with some cloves pushed in them. I usually use 6 but if you like cloves, add what more.

Place the ham on top of the onions flat/cut side down.

Pour the honey bourbon mixture over the ham and bring up the side of the foil to wrap containing the liquid. Wrap that ham up.

Place it in the 275 degree oven and cook for about 15 minutes per pound. Remember it’s better to serve it warm and tasty instead of hot and leathery. It's already cooked. If you are using a good reliable slow cooker, cook it on LOW for about 2 hours. If you’re not serving right away, set it to the WARM setting. Keep it wrapped if not finishing right away. Save those juices because we are going to heat that up and serve it hot alongside the ham like a loose gravy.

Perfect sides to go with this ham: 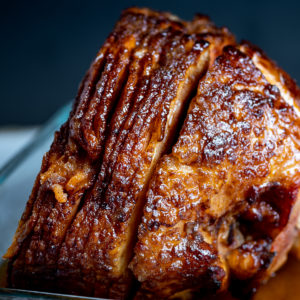 Print Recipe Pin Recipe
A Honey Baked Ham with a touch of bourbon and fragrant spices that blows away anything you can buy but at a fraction of the price. An incredibly simple and delicious meal you can prepare for holidays, parties and gatherings, with little effort.Cooking time varies depending on size of ham.7 - 8 pounds serves about 10 - 159 - 10 pounds serves 16 - 20
Course: Main Course
Cuisine: American
Keyword: Baked Ham, Ham
Prep Time: 10 minutes
Cook Time: 2 hours 30 minutes
Author: Natalie Gregory

When ready to glaze:

This ham can be served at room temperature. After baking it with the honey bourbon mixture, you can set it aside until you're ready to glaze.
Did you make this recipe? I would love to see how it turns out. Tag me on Instagram @thegeneticchef or tag #thegeneticchef and tell me all about it!