Blueberry Buttermilk Biscuits are loaded with blueberries then topped with a creamy glaze for a heavenly, buttery treat. These are made in a cast iron skillet and are a perfect way to start your day and can be served for breakfast, brunch, or even dessert.

Let’s talk about the blueberries. Use frozen ones for best results. Why? Because it’s important to keep the dough cold when making biscuits, and using frozen blueberries is a brilliant way to do it. Also, you can buy frozen blueberries anytime. How convenient is that?

If you don’t have buttermilk, you can make your own here. You’ll have ¼ cup remaining if using my recipe. What to do with that extra ¼ cup? Well, you can make my delicious banana bread. For this blueberry buttermilk biscuit recipe, we’ll only need ¾ cup (I have the recipe for that in the notes).

Next step, working the dough:

You will only lightly work this dough because the more you knead it or work it, the tougher the texture the biscuits will have. You don’t want that. Gather up the dough and make sure everything is mixed together. Do this by forming a mound, then pressing down on it. Don’t make this if you’re pissed off at something because you’ll only toughen the dough and that will just piss you off even more. If you want to take your aggression out on the dough, make my oatmeal bread or soft fluffy rolls.

After gathering and forming the dough, flatten the dough to about ¾”. No, you don’t have to measure this. Just eyeball it because it doesn’t have to be exact.

Rather than kneading in the blueberries, I like to top each layer of dough with the blueberries and press them down gently. I find it’s easier, neater, and smarter.

Scatter a third of the blueberries over one layer and gently press them down. Repeat with the other layer. Now, cut out the biscuits. Using a floured biscuit cutter or glass rim, press down then up. Do not twist because that will prevent them from rising. Ok? Ok.

Bake and make the glaze. Just mix the glaze ingredients together. After the biscuits are baked, let them cool for about 10 minutes then drizzle with icing. If you pour on the glaze while the biscuits are hot, they will melt into the biscuit and have a thinner topping. If you wait 10 minutes or so, it will be more like a frosting. It’s up to you. The ones here were a little cooler because I was running around like a crazed monkey trying to take pictures.

Serve these blueberry buttermilk biscuits for breakfast, brunch, snacking, or dessert. Seriously, who cares what time it is these are good anytime.

Love these blueberry buttermilk biscuits? Then you must try: 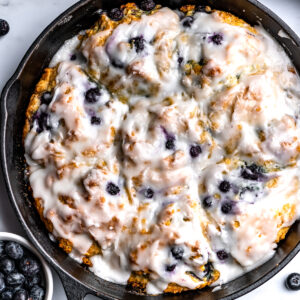 Print Recipe Pin Recipe
Blueberry Buttermilk Biscuits are loaded with blueberries then topped with a creamy glaze for a heavenly, buttery treat. These are made in a cast iron skillet and are a perfect way to start your day and can be served for breakfast, brunch, or even dessert.
Course: Breakfast, Brunch, Dessert
Cuisine: American
Keyword: Biscuits, Blueberry, Cast Iron
Prep Time: 10 minutes
Cook Time: 20 minutes
Total Time: 30 minutes
Servings: 8 Biscuits
Author: Natalie Gregory

*To make buttermilk, add 2 teaspoons of lemon juice into a measuring cup. Add milk to make ¾ cup. **Using frozen blueberries is best because it keeps the dough cold and there’s less “bleeding” into the dough. If you have fresh, I recommend freezing them for at least an hour before using.
Did you make this recipe? I would love to see how it turns out. Tag me on Instagram @thegeneticchef or tag #thegeneticchef and tell me all about it!