A simple, no fuss, Cinnamon Coffee Cake that’s delicious, moist, and flavorful, topped with a streusel topping that actually sinks into the cake after it’s baked. A recipe created by accident that turned out fabulous! No mixer required.

This cake came about by accident. I was making a coffee cake and intended to have a cinnamon swirl throughout, but inadvertently mixed the cinnamon in with the flour. My white batter turned tan but there was no way I was going to waste it so I continued on. From there I chose to use all brown sugar which ended up being a great decision. That cake turned out to be delicious and my mistake worked in my favor.

What makes this cinnamon coffee cake so special?

To make the streusel, simply add some flour, brown sugar, cinnamon and a pinch of salt in a bowl then add the melted butter. Mix until you get lumps and everything is coated with the butter. The melted butter creates a far superior streusel than cutting in cold butter. It’s the same as I do when making my simple crumb coffee cake (also delicious).

One thing to note about this cinnamon coffee cake is that the streusel sinks in.

The streusel top actually sinks into the cake and that’s what it’s supposed to do. That was the accident part of this recipe that worked out wonderfully and it makes the cake look more appealing in my opinion. There are waves of streusel going up and sinking down. Whatever sinks in melds with the batter and it’s the best part. I know you will think something went wrong when you see it sink but that’s what it is supposed to do. Just eat it and smile.

9” tube pan with a removable bottom

This is perfect to serve whenever you want a simple, no fuss cake that gets even better the next day. You don’t even have to drag out your mixer for this one. Enjoy.

Try some of my other delicious cakes: 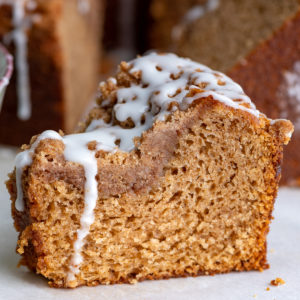 Glaze: (Optional as this cake is delicious without it too)

Make the glaze: (if using)

If you need to make your own buttermilk, simply add 1 tablespoon lemon juice into a 2 cup measure, then fill it with milk to make 1 cup. Using a 2 cup measure gives you enough room to add the oil, egg and flavoring all in one measure which then makes it easier to mix right in the measuring cup then add to the dry ingredients.
Did you make this recipe? I would love to see how it turns out. Tag me on Instagram @thegeneticchef or tag #thegeneticchef and tell me all about it!