Beef Barley Soup is a simple soup for any level cook. You get a hearty soup loaded with chunks of beef and vegetables and thickened with barley. Just throw everything in the pot and let it go. 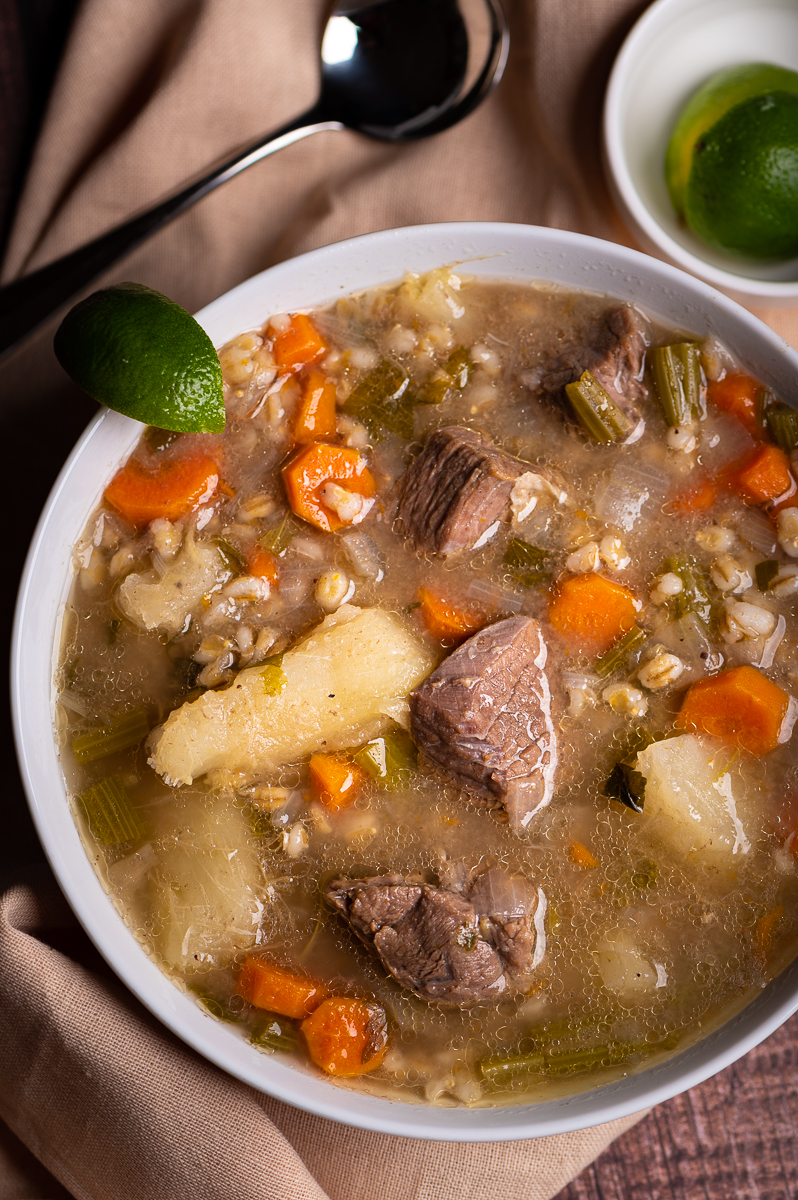 You don’t have to be a cook to make this soup. You don’t even have to like to cook. You do need to eat though, right? Just chop up a few things and throw everything in the pot with some water and let it go. You can feed a big family or have enough soup for many meals.

My Mom taught me how to make this soup and I have fond memories of her singing while chopping up the vegetables. The meat would be trimmed of its fat and thrown in raw. She filled the pot with water and walked away. I remembered thinking how easy it was to cook and couldn’t understand why some people complained about it so much. Now, when I cook, I always put music on and chop away. I would listen to anything from Tom Jones singing Delilah to U2 and Mary J. Blige singing One.

If you can get your hands on some frozen yuca, you’ll get to truly experience the amazing flavor of this soup. It seems to be gaining popularity in a lot of markets and Goya sells it peeled and cut in chunks in the frozen section of many markets including Walmart and Target. If you don’t have access to frozen yuca, you can use potatoes.

I use water to make this soup rather than stock. You may be thinking by using water the soup would lack in flavor, but you’re basically making a stock with the beef and vegetables and simmering it for hours concentrates the flavor. I know all the chefs on TV say to always use stock and never water, but this is how my Mom, my grandmother, and my great grandmother made it. You could use a bone-in chuck roast for more flavor. I use boneless because it’s easier to trim and more available to me. 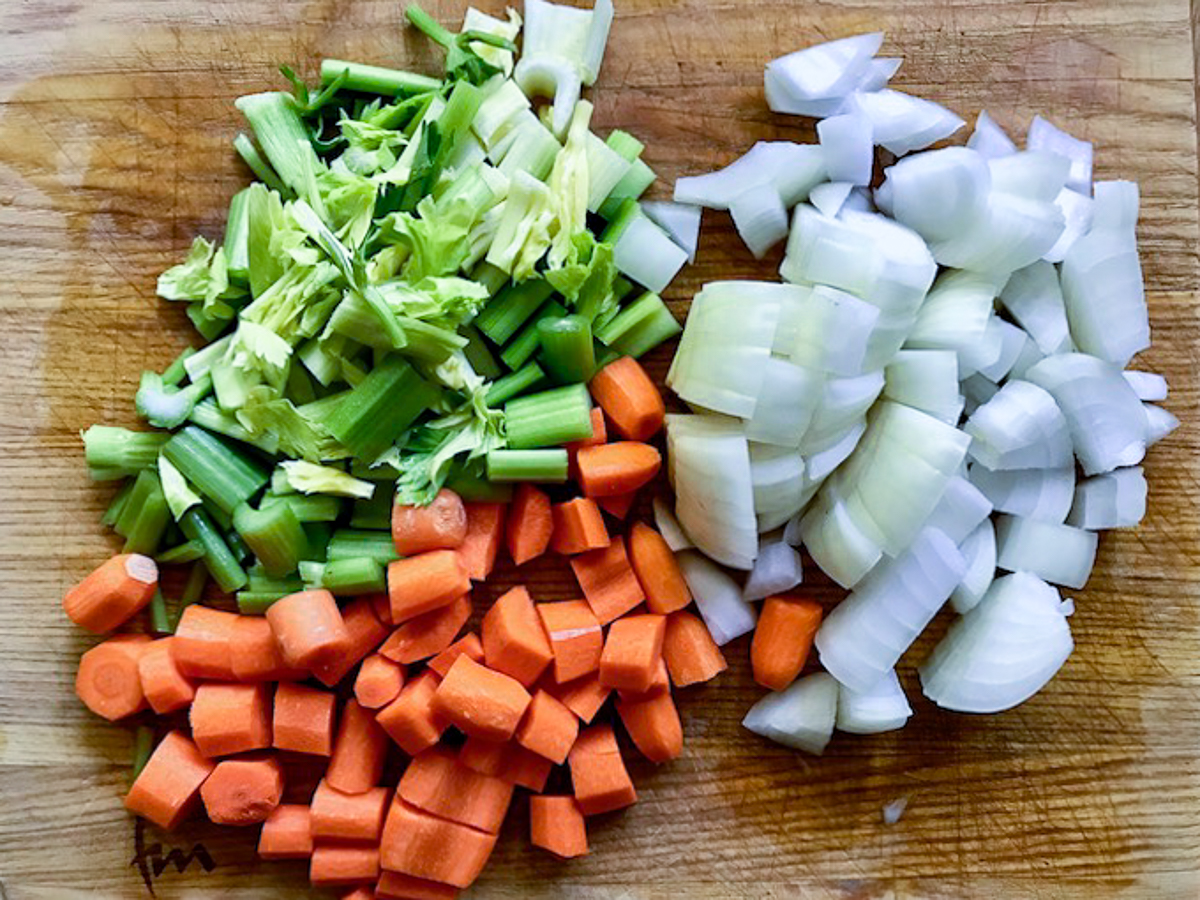 Only salt and pepper are used for seasoning. You may have expected a bigger list, but this beef barley soup relies on the meat and vegetables for flavor. Trust me, it’s all you need for this soup. Just make sure you season to taste and don’t be surprised by the amount of salt needed. Remember that you’re making a lot of soup and the amount of salt you’ll use is still less than the canned stuff.

When the soup is simmering, you'll notice some scum forming on top. Skim that off and discard. That stuff will cloud up the soup but it won’t hurt you so don’t worry about getting every last bit.

Fresh lime juice is added at the end bringing all the flavors together. It also brightens the soup. 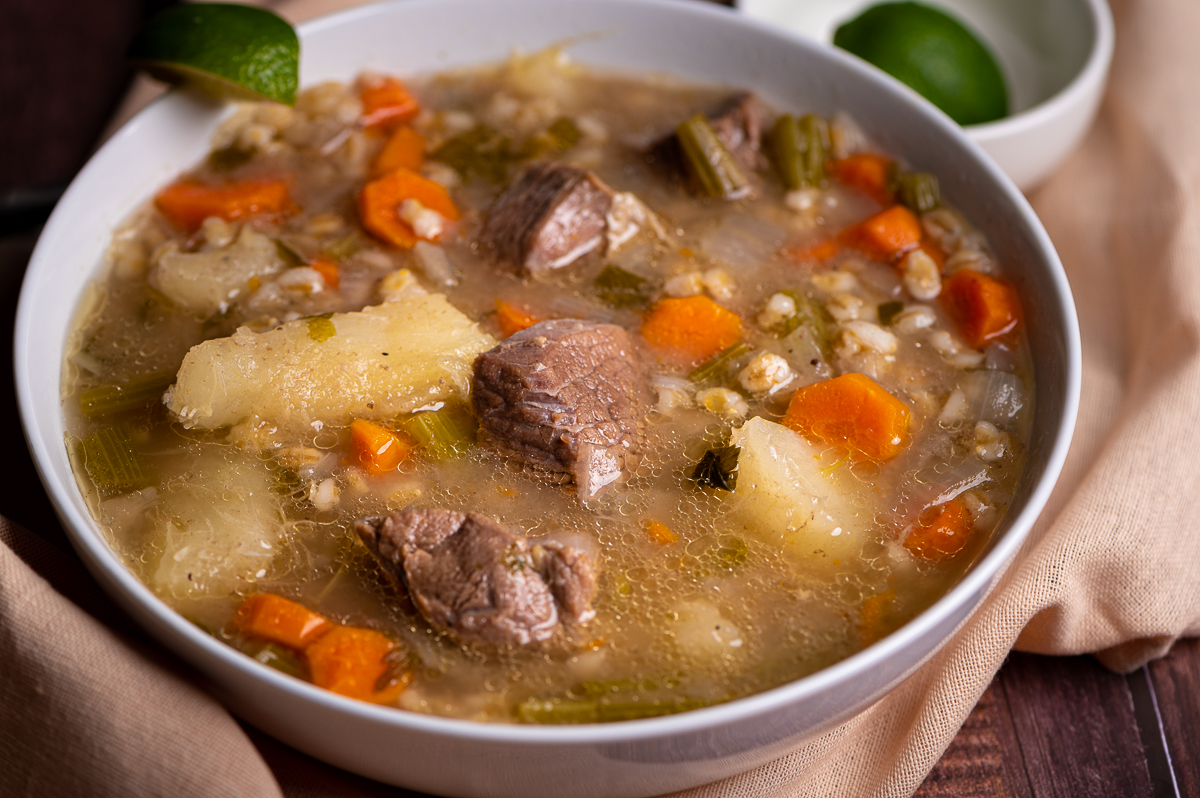 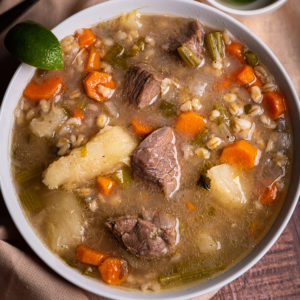 Print Recipe Pin Recipe
Beef Barley Soup is a simple soup for any level cook. You get a hearty soup loaded with chunks of beef and vegetables and thickened with barley. Makes a bunch and can be frozen for later. Use the leaves from the celery tops for more flavor.

This soup is simply seasoned with salt and pepper. Season to your taste and don’t be afraid to season because this makes a lot of soup. Squeeze a wedge of lime over each serving and stir the juice in to brighten the soup.
Makes 8 - 10 servings.
Course: Soup
Cuisine: Peruvian
Keyword: Beef, Beef Barley Soup, Soup
Prep Time: 15 minutes
Cook Time: 1 hour 30 minutes
Author: Natalie Gregory

*If you use potatoes, they will break up and thicken the soup more. You may need to add a little more water. If so, add a cup at a time. The soup also thickens when cooling but will loosen up again when heated.
Did you make this recipe? I would love to see how it turns out. Tag me on Instagram @thegeneticchef or tag #thegeneticchef and tell me all about it!