These Smashed Potatoes are buttery, velvety, salty, and have little bumps and ridges that turn golden and lightly crisp. They go with anything and make your meal a little more interesting. Easy to prepare and no flipping required. 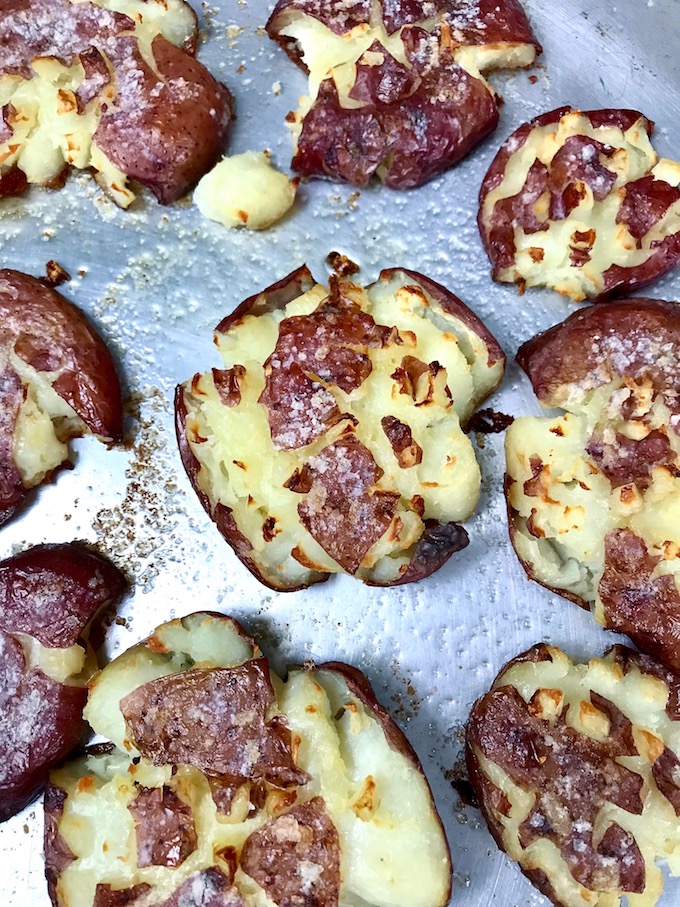 This is one of those recipes that actually doesn’t require a recipe. It’s the method of preparation that needs a little explaining. After making these for years, I’ve discovered the best way to prepare them where the outcome is consistent. Notice the title doesn’t have the word crispy in it. I have seen many recipes for these potatoes titled as crispy, but I feel that’s misleading. The potatoes are ½ - 1 inch thick and the skins are so thin, it’s pressed into the flesh of the potato and it’s not enough to turn “crispy”. There’s no crunch when you bite into them, but that doesn’t mean they’re not delicious. Just wanted to clarify and keep it real here on the genetic chef dot com.

This recipe is best when using small reds or Yukon gold potatoes. If you use large potatoes, they break apart no matter how easy you are when smashing them.

Olive oil or Butter? Use both!

I use two fats when making these smashed potatoes - olive oil and butter. The olive oil is poured onto the baking sheet and swirled around to coat the bottom. Of course, you could use your fingers to spread the oil around to coat. Since your hands are already clean (right?) you can use the oil on your fingers to rub your hands so they stay young and smooth. Just ask Sophia Loren! 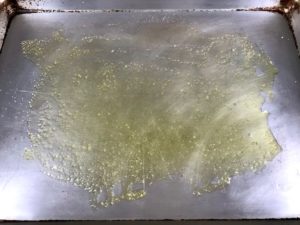 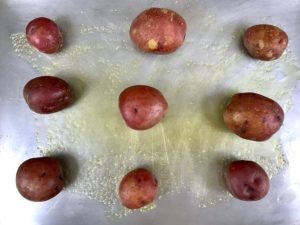 Grab a good pinch of kosher salt and sprinkle it on top of the oil. Now, place the potatoes evenly on the baking sheet and smash them lightly. You don’t want to break them up, you just want to flatten them slightly to give more surface area to brown. If you’re angry, remember the potatoes didn’t do anything to you. Go make some bread if you have anger issues. I find kneading always helps. 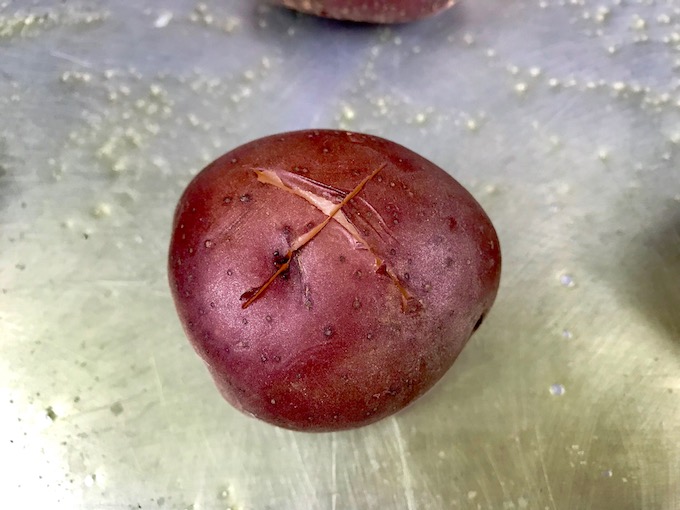 I find cutting an X on top of the potato helps to evenly smash the potato. If you look at the photo, you'll notice an even smash with the top row that were marked with an X on top. The bottom potatoes aren't even. 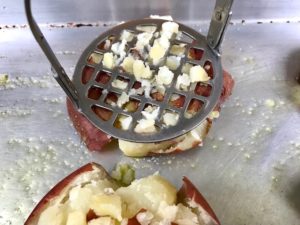 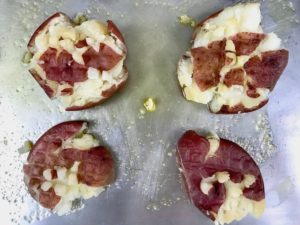 A potato masher creates little bumps that pop out. Using the heel of your hand or flat solid object tends to flatten the middle and you won’t get those little bumps and ridges that gives these smashed potatoes their character. You need those to get golden crispy points. Otherwise, you’re getting a smashed flattened potato. Big whoop - nothing interesting there.

To flip or not to flip…

I've made these smashed potatoes for years and sometimes I flipped, sometimes I didn’t. If you flip, the outcome is a golden top and if you don’t, the tops will be buttery and softer in texture. One thing about flipping, the potato tends to fall apart. Think about it, you smashed them and pieces sometimes separate from the potato. I stopped flipping, and found a better way to prepare these. 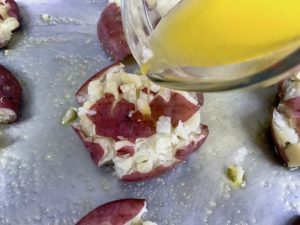 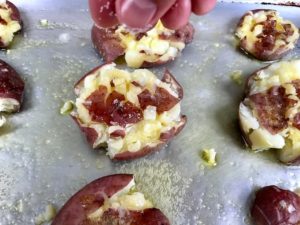 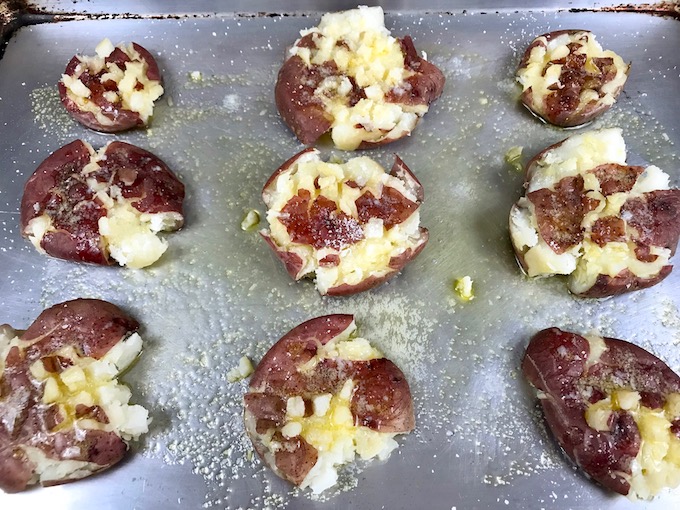 Broil and forget the flipping... 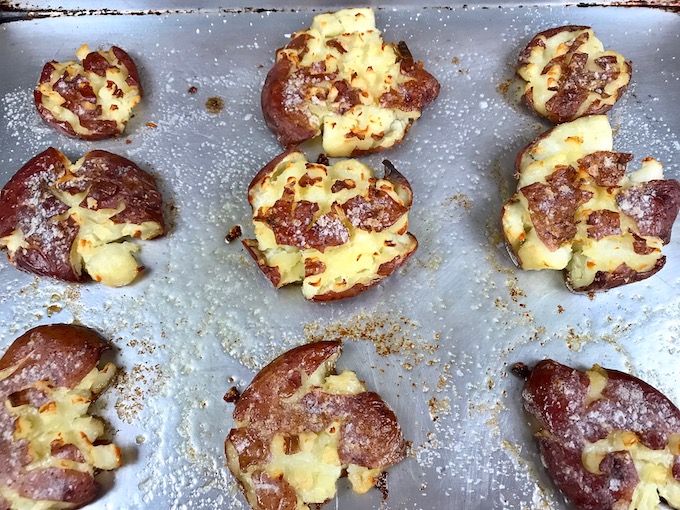 Now, if you want golden tops with a few crispy points, place the baking sheet on the upper third oven rack (not the top rack or it will burn) and broil for a few minutes until the tops turn golden. Now you have the best of both worlds without risking flipping and potatoes falling apart.

Love potatoes as much as I do? Try any of my potato recipes like sweet potato planks, Peruvian oil and vinegar potato salad, or my potato leek soup. 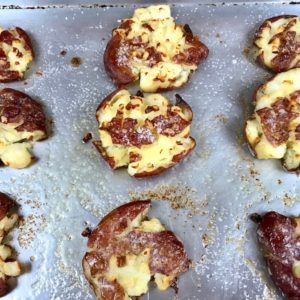 Print Recipe Pin Recipe
These Salty Golden Smashed Potatoes are buttery, velvety, salty, and have little bumps and ridges that turn golden and lightly crisp. They go with anything and make your meal a little more interesting. Easy to prepare and no flipping required. You can boil these ahead and continue with the recipe when you’re ready to bake. Use small red or small Yukon gold potatoes.
Course: Side
Cuisine: American
Keyword: Potato, Smashed Potatoes
Prep Time: 10 minutes
Cook Time: 50 minutes
Total Time: 1 hour
Servings: 4
Author: Natalie

Use small/baby red or yellow potatoes for best results.
Did you make this recipe? I would love to see how it turns out. Tag me on Instagram @thegeneticchef or tag #thegeneticchef and tell me all about it!