Sautéed Eggplant and Tomatoes (melanzane a funghetto) is a quick side dish that’s simple to prepare and good for you. Can be served as a side, as part of an antipasto, as a topping for bread, or on top of pasta.

Although the name of this dish contains “funghetto” which translates to “mushroom”, it actually means that when the eggplant is sauteed it has the texture of mushrooms. There are no mushrooms in this dish. I would have translated it to melanzane e pomodori which makes more sense. But, who am I to change it?

You don’t need to peel the eggplant or salt it. Just slice off the ends then chop the eggplant into 1-inch cubes. It doesn’t really matter if they’re a little bigger, just cut them the size that you can fit them into your mouth.

All you have to do is heat up some olive oil in a skillet. It doesn’t have to be extra virgin either. In fact, my family used regular olive oil when cooking. Extra virgin olive oil was always saved for salads or drizzling on top of food before serving. Just know, you don’t have to cook with the expensive stuff. Save it for finishing.

This dish comes together rather quickly. I don’t salt the eggplant beforehand and neither did my uncle Tony when he taught me how to make this dish. Salting removes some of the bitterness of the eggplant but if you’re using fresh eggplant that aren’t super huge, you shouldn’t have a problem.

The eggplant is sauteed until it gets some color and softens a bit. Then it’s covered for about 8 - 10 minutes. This time allows the eggplant to cook and release the oil it has absorbed. The garlic and tomatoes are then stirred in and cooked until the tomatoes “melt” and release their juices. Those juices blend perfectly with the eggplant, garlic and oil. The only seasonings you need are oregano, salt and pepper. If you like things hot, you can substitute crushed red pepper. Some fresh torn (or sliced) basil leaves are added at the end.

About the oregano...the Italian version of this dish doesn’t add it. Being first generation Peruvian and Italian, I add a little Peruvian flair to this dish by adding the oregano and “cooking” it with the garlic to release it’s flavor.

Serve sautéed eggplant and tomatoes as a side or on top of pasta. It’s easy and good for you. 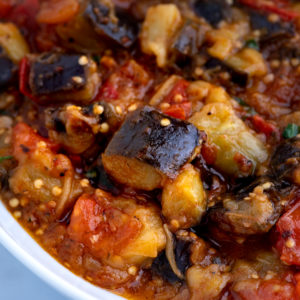 Print Recipe Pin Recipe
Sautéed Eggplant and Tomatoes (melanzane a funghetto) is a quick side dish that’s simple to prepare and good for you. Can be served as a side, as part of an antipasto, as a topping for bread, or on top of pasta.
Course: Side
Cuisine: Italian
Keyword: Eggplant, Tomatoes
Prep Time: 10 minutes
Cook Time: 15 minutes
Total Time: 25 minutes
Servings: 4
Author: Natalie Gregory