A chicken pot pie loaded with chicken and vegetables in a creamy, flavorful sauce and topped with a flaky crust that's so worth the calories. You can use a homemade crust or make it more simple by using store bought. This feeds a crowd but you can scale in half or make two and freeze one for later.

You’ll see a lot of steps in this recipe but it’s not a big deal. Read it through before starting. Also, if you choose to use a store-bought crust, it will be quicker even though this shortening crust is super easy and basically foolproof. You just roll it out to the size of your baking dish then cut it into squares. The more imperfect it is, the more perfect it looks.

The chicken is poached, similar to the method I used in my Sonoma chicken salad recipe. Vermouth or white wine is added to the poaching stock to give a depth of flavor. After the chicken is poached, it’s removed and shredded or diced. When shredding or dicing the chicken, remove the tendons. Nothing is worse than chewing on a tendon or when you see someone’s face after they do!

You may notice some scum that forms in the liquid when the chicken is poaching. Don’t worry about it. If you want to skim it off or strain it, do so, but it blends into the sauce. No big deal.

The onions are sautéed in butter until translucent then carrots and celery are added and cooked just until softened. Chicken stock is stirred in along with some cream which adds richness to the sauce and create the thick texture that you’d expect from a chicken pot pie.

It doesn’t matter how good the filling is if the crust isn’t good. For me, the best tasting crust is a super simple-to-make shortening crust. If you don’t want to make your own, use a store bought and don’t fret about it.

I find cutting the crust into squares and arranging them over the top creates a visually pleasing chicken pot pie, one that you just want to dive into and devour. It also makes it less fussy.

The shortening crust is a breeze to make and the worst that can happen is you end up with a little flour on you. It’s worth it, I promise, but if you prefer to use a store bought it’s totally fine. Did I say that already?

Make it today and make it often.

It feeds a crowd and leftovers are awesome. 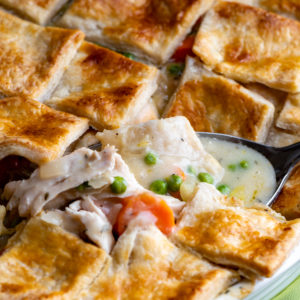 The Most Delicious Chicken Pot Pie

Print Recipe Pin Recipe
A chicken pot pie so worth the calories that’s loaded with chicken and vegetables in a creamy flavorful sauce then topped with a flaky crust. You can use a homemade crust or make it simpler by using store bought. This feeds a crowd but you can scale in half or make two and freeze one for later.This feeds 8 generously.The prep time is about 30 minutes and includes chopping and making crust. If using store-bought, you save yourself 15 minutes. I don't include the time to chill the dough or to poach the chicken because you continue with other parts of the recipe during those times.The cook time includes preparing filling and baking.
Course: Main Course
Cuisine: American
Keyword: Chicken, Chicken Pot Pie
Prep Time: 30 minutes
Cook Time: 1 hour 10 minutes
Total Time: 1 hour 40 minutes
Servings: 8
Author: Natalie Gregory

If you want a looser filling, you can add ½ - 1 cup more of chicken stock. I’ve made this using 4 cups and the filling is loose but still delicious. It does set up beautifully when reheating for leftovers. *Remove the tendons when shredding or dicing chicken. Nothing is worse than chewing on a tendon.
Did you make this recipe? I would love to see how it turns out. Tag me on Instagram @thegeneticchef or tag #thegeneticchef and tell me all about it!